As with most martial arts, adults who begin Brazilian Jiu-Jitsu (BJJ) start out with a white belt. BJJ has five adult belts in total: white, blue, purple, brown and black. When many goal-oriented students start training at Gracie Miranda, it’s not long before they ask a common question: “how long will it take me to get a blue belt?”

The answer isn’t a satisfying one, because the truth is that how long it takes you to get a blue belt depends on several factors. Training frequency, focus during training and natural talent make the answer different for everyone.

In general, BJJ practitioners who train regularly will earn their blue belt between 18 months and 3 years. Here’s what you need to know.

Gracie Miranda is a BJJ academy in the Sutherland Shire. If you’re interested in martial arts training, come in for a free trial. 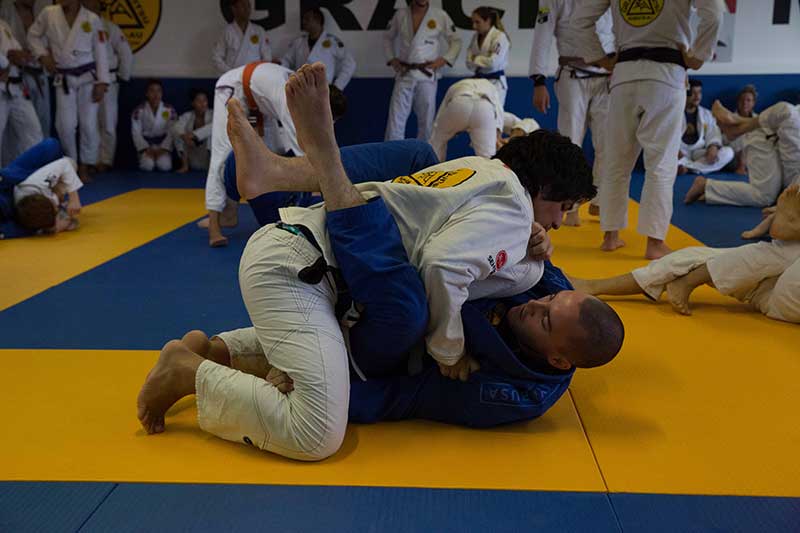 Training frequency isn’t everything (but it helps)

The most obvious factor for BJJ progres is how frequently you train. Martial arts practitioners often mistakenly try to measure expertise by years spent training. The more accurate read is hours spent on the mats.

However, it’s crucial to note that Jiu-Jitsu is a marathon and not a sprint. It takes around 15 years of regular training to earn a black belt. That’s instructive: Whatever your training regime is, it has to be sustainable. One mistake new trainees make is committing to training as often as humanly possible. It often results in burnout.

The average new student should aim to train between 3 and 4 times a week. Sometimes people can train more frequently. For others, who have time-consuming family or work schedules, 1 or 2 sessions per week is the most they can eke out.

Don’t feel bad if you’re strapped for time and can’t train as much as you like to. True, you’ll progress faster training 4 hours per week than 2 hours – but better to train 2 hours than 0 hours. But if you’re wondering why some people take 18 months to earn a blue belt and others take over 2 years, training volume is often the culprit.

How much does talent matter?

Jiu-Jitsu is a fantastic martial art, but it’s not magic. In BJJ, talent and athleticism matter less than they do in other martial arts – but it would be a lie to say that talent is not a significant factor.

Some people excel at Jiu-Jitsu with minimal effort. Similarly, there are many people to whom skills won’t come naturally.

There are a few important notes to make here. First, Jiu-Jitsu is a martial art for everyone. Even if you’re not a natural, perseverance and dedication will eventually see you become an expert. Second, as noted, Jiu-Jitsu is a very long game. Many who glide through to blue belt, having become accustomed to picking up skills quickly, can struggle in the face of stiff competition at purple and brown belt.

If you’re someone who takes longer to acquire physical skills, progressing in Jiu-Jitsu will be slower. But the attributes of perseverance and dedication you hone by continuous training are equally as important as any technique you learn on the mats.

As with all things in martial arts, you need to take the big picture approach.

Don’t compare yourself to others

The truest answer to the question “how long does it take to get X” belt is actually “it doesn’t really matter.”

Jiu-Jitsu is a self-defense system, and it’s a sport. Skill acquisition is more important than what belt is around your waist. The key to progressing in Jiu-Jitsu is to focus on the former and not the latter.

Unless you’re hoping to become a world-class BJJ competitor, there’s little to be gained from comparing yourself to others. Comparisons are not only unhelpful, they’re also often inaccurate. Everyone who steps on the mats at Gracie Miranda and other academies has different life situations, physical attributes and training schedules.

What’s important is that you focus on yourself. Compare yourself today to yourself a month ago. What are you better at? What gaps most urgently need plugging? It’s hard to control when you get your next belt. It’s easier to control improving your guard retention, mount escapes or any number of other skills.

If you’re interested in taking up martial arts, come into Gracie Miranda for a free trial class.