It’s a new year, and you know what that means – New Year’s resolutions. People in Cronulla, Miranda and all around the Shire will resolve to work out more, use social media less and so on.

Practitioners at Gracie Miranda, both children and adults, often want to enter the new year by boosting their BJJ game. Here’s how to help your kid if January gives them a burning desire to become self defence masters. 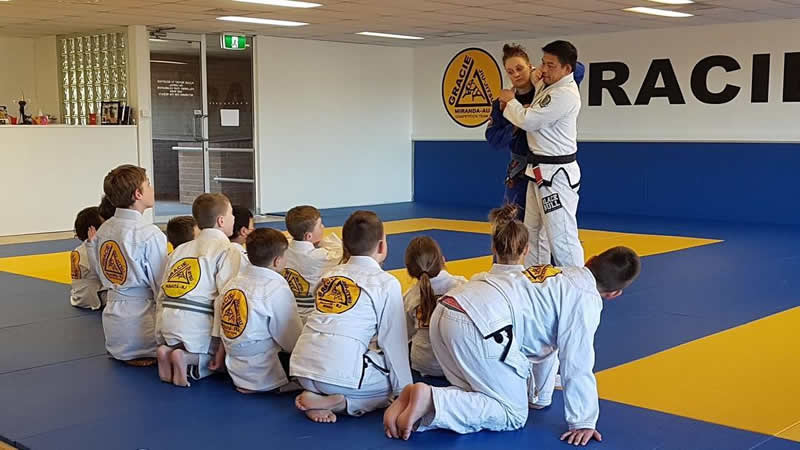 OK, the most obvious one first! If self defence is the goal, signing up to a martial art is the obvious first step. Which martial art to choose is a bit less obvious.

If you’re on this page because you’re trying to choose a martial art for your child, you’ll naturally assume that Brazilian Jiu Jitsu is what Gracie Miranda recommends. And you’d be correct! However, all enduring martial arts, like Taekwondo and Muay-Thai, have some self-defence benefit. We’d be liars to deny that. That said, when it comes to real-life self defence, it certainly doesn’t get better than BJJ.

Confused about what distinguishes Jiu Jitsu? It’s a grappling art, which immediately makes it different to the aforementioned Taekwondo and Muay-Thai, which, like Karate and Kung-Fu, are striking martial arts. Brazilian Jiu Jitsu is more similar to wrestling, although with a heavier emphasis on submission, and Judo, but with more of a focus on ground fighting.

For a more comprehensive look at BJJ’s benefits for children, check out this article. What martial art anyone enjoys the most comes down to personal preference but, as far as self defence goes, Brazilian Jiu Jitsu training is as good a bet you can make. In the Cronulla/Shire area and on the fence? Gracie Miranda offers free introductory classes for both children and adults.

Miranda marathon, not an Olympic sprint

When people race into New Year resolution-fueled self improvement, they often think more is better. Consider the sedentary worker who decides to finally get in shape: They sign up to the gym, work out hard 6 days in a row while eating a strict diet and, after no dramatic change has happened in this time, give up.

With this in mind, your child (or you, if you train) may be inclined to really ramp up your training, maybe double it from three times a week to six times a week. That’ll really get those gains flowing right! Maybe. Yes, the more time on the mat the better, and we encourage people to train as much as they can. But the truth is many people, no matter what age, can’t keep that schedule up forever

If your child suggests doubling or tripling their training volume, a better route might be to bring them to training an extra day a week. If they can keep this up for six months, and you have the time, maybe add in another weekly session. Gradual improvement is more likely to last, and therefore more valuable.

Motivation is fleeting, but consistency is a skill. Better to encourage the latter than the former!

Again, when people think New Year’s Resolution they often think of doing something more. But when it comes to Brazilian Jiu Jitsu goals, there’s more to it than just quantity of training.

Goals can be a terrific way to focus your kid on one aspect of self defence, or on any range of BJJ techniques. Instead of a sweeping resolution to double their training, encourage your child to segment his resolution into a set of smaller goals.

Some examples: Learn 10 self-defence techniques. Enter 5 competitions. Learn how to apply an armbar from 3 different positions – and the same with triangle chokes.

Not only will goals such as these focus your child on refining self-defence and Brazilian Jiu Jitsu techniques, they’ll naturally lend themselves to more goals. Once they’ve learned 10 self-defence techniques, for instance, a new goal could be to successfully apply those techniques to an older kid who’s 10kg heavier in class. This is the same with BJJ techniques, for which there are endless variations to learn.

These goals will encourage consistent training – which, once again, is better than relying on momentary motivation.

We look forward to seeing you and your kids at Gracie Miranda in January. In 2019 we’ll all improve together!

Come train with us. No pressure!!
Book Now
0Shares
PrevNext