If you’re new to Brazillian Jiu-Jitsu (BJJ) or are thinking about starting a martial arts journey, you’re probably fascinated with belts. We see this a lot with students at Gracie Miranda.

Many martial arts, BJJ included, have a belt system wherein you progress from white to black. Naturally, when you begin as a novice you prioritize improving your rank. You naturally see a different coloured belt as proof of your growth.

The road from white belt to black is particularly long and arduous for BJJ practitioners. Those who regularly practice Taekwondo or Karate can expect to get their black belt in 3-5 years. In Jiu-Jitsu, it’s more like 10-15 years.

And the process is complicated, too. To students, it can seem mysterious as to why or when they or their training partners are promoted. But people new to BJJ should know that the first part of ranking up is to forget about your rank and instead focus on the process of improving. 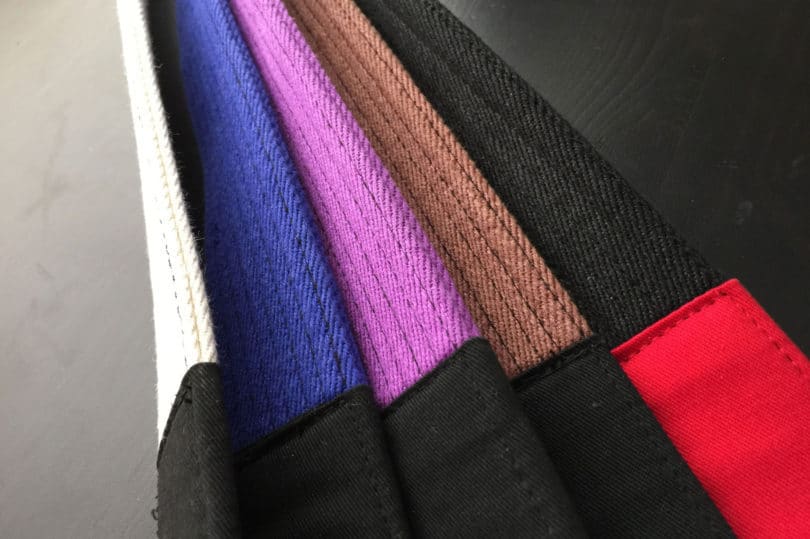 Many expert BJJ practitioners say receiving their black belt was among the happiest days of their life. After all, most black belts spend around 3x the length of a university degree to get their distinction.

Yet if you take the belt away, these grapplers would be no less skilled or dangerous. The belt represents technical ability. Therefore, the key to rising up the ranks from white through blue, purple, brown and ultimately black, is in improving your technical ability.

The essential thing to understand is that you cannot actually control when you get your next promotion, but you can control how you approach your Jiu-Jitsu development. Your coach will tell you when you’re ready for the next level. You are responsible for getting to that point.

Jiu-Jitsu is unlike other martial arts in that it is particularly spar-intensive. You’ll be sparring — or “rolling” as we call it — from your first or second class. This makes BJJ training highly practical, as it allows you to test the techniques you learn against fully resisting opponents. Just as importantly, rolling shows you what’s not working.

If you find yourself asking, “how can I get my next belt”, reframe the question to yourself as “what can I improve?” The answer may be guard retention, a certain submission you can’t get right, a certain position you can’t escape or a sweep you keep getting caught with.

There’s no doubt, receiving a new stripe or belt is deeply satisfying. But Jiu-Jitsu, being so spar heavy, also gives you the opportunity to tangibly feel when you’re improving. This may be through you nailing a submission that you formerly struggled with, escaping submission from an opponent who previously overwhelmed you, or even something as small as lasting 30 seconds longer than before against someone far more experienced.

Experiencing this change, and feeling yourself improve against training partners, can be equally as satisfying as getting a promotion. This should be the goal. We don’t sign up to martial arts classes to win, we sign up to learn. Learn enough and the belts will come.

BJJ is an outstanding self-defense system and an exhilarating sport, but it’s not easy. This is reflected in the time it takes to achieve your black belt — and the fact that many experts say BJJ really begins once you get to black belt level.

That said, Jiu-Jitsu is easier for some than for others. Like everything in life, some people will have a natural talent for it and others will find it harder than average.

But remember, BJJ was designed from the ground up to be used against larger, more athletic opponents. It’s focused around technique and timing more so than power or agility. In other words, if you focus on honing technique you will improve. Some improve faster than others, but it’s not a martial art that requires you to be naturally gifted.

The most important trait for a BJJ practitioner, then, is persistence. BJJ is often harder on the ego and emotions than it is on the body. There will be days, weeks and even months where you feel like you’re plateauing. There will be disappointing losses, whether in class or competition.

Almost everyone who puts on a gi thinks, at one point or another, that maybe Jiu-Jitsu is too hard. Only the ones who don’t give in to this defeat impulse end up achieving their goals.

A focus on improvement + perseverance + time = belt progression. Sadly, there are no shortcuts. Happily, there are few joys in life greater than progressing through your martial arts journey.

If you’re interested in self-improvement or learning self-defence, come into Gracie Miranda for a free trial.