It’s a conundrum we come across a lot. Parents in Cronulla want to involve their kids in an active hobby, but are worried their child might be too young for a martial art. But before you shy away from martial arts and sign up your young one up to a Sutherland Shire soccer team, we have some guidelines for Brazilian Jiu-Jitsu and kids that you should know about!

We believe any child six years old and up will be perfectly fine for Brazilian Jiu-Jitsu. Younger children will still be safe on the mats – while accidents can happen in any sport, we make sure the kids are never in harm’s way – but kids much younger than 6 can sometimes feel uncomfortable or disoriented on the mats, which can lead to premature quitting. Six years, on the other hand, is a safe bet.

Choosing the right martial art for your child can be a dizzying process. If you’ve never heard of it, Brazilian Jiu-Jitsu is a grappling art, broadly similar to wrestling or judo, where practitioners are encouraged to use technique, leverage, and timing over strength, power, and athleticism. It’s almost closer to human chess than it is to Asian martial arts like Kung Fu, Karate, and Muay Thai, which are each based around punches, kicks, and other strikes.

Don’t shy away from Brazilian Jiu-Jitsu!

Which martial art is best? This question has been around for literally thousands of years, and there’s no definitive way to answer it. But unless you’re expecting your child to be a UFC champion one day, that may not be the most important consideration anyway. What we do know, though, is that Brazilian Jiu-Jitsu is great for kids.

The most obvious benefit is physical health. Training Brazilian Jiu-Jitsu will drastically improve your child’s cardiovascular health and develop coordination. More importantly, it’ll get your kid interested in exercise in a fun way: Running is also great for cardiovascular health, but who actually likes to run?

But while Brazilian Jiu-Jitsu will help boost strength, coordination, cardiovascular output and more, any experienced practitioner will tell you that it builds the mind just as well as the body.

Not everyone is destined to be a black belt, but it speaks to how perseverance is a core principle of Brazilian Jiu-Jitsu. Kids learn lots of self defense techniques in Brazilian Jiu-Jitsu, but they also learn important life lessons. It teaches them about setbacks and hardships – but it also shows them they can overcome hurdles with enough determination.

Last but certainly not least, Brazilian Jiu-Jitsu is the perfect martial art of de-escalation and self defense.

It’s true that arts like Muay Thai are also helpful for self defence – but it’s hard to elbow strike someone without injuring them.

When it comes to striking martial arts, the best defense is a good offense. At Gracie Miranda, we’ll teach your child to defend themselves without always having to hurt anyone.

Competition team? Save that for 10 and up!

While six years old is the perfect age to start training, it’s best to keep your child from competition until around 10.

Competition is an important part of Brazilian Jiu-Jitsu for many practitioners. The drive for gold brings the best out of many, and forces players to identify weaknesses in their game and turn them into strengths. The flipside, though, is that competition day can be extremely stressful, and the sting of defeat can be devastating.

There’s a saying in Brazilian Jiu-Jitsu for competition: “Win or learn.” Understandably, many kids under 10 won’t find learning much of a substitute for winning, and can find the competition experience traumatising.

This isn’t a problem though. Some do Brazilian Jiu-Jitsu for the medals, while others don’t compete at all. It’s optional: The important part is showing up to training.

At Gracie Miranda we run kids classes every weekday from 4PM to 5PM, as well as one on Sunday from 10AM to 11AM. Book a free trial lesson here. 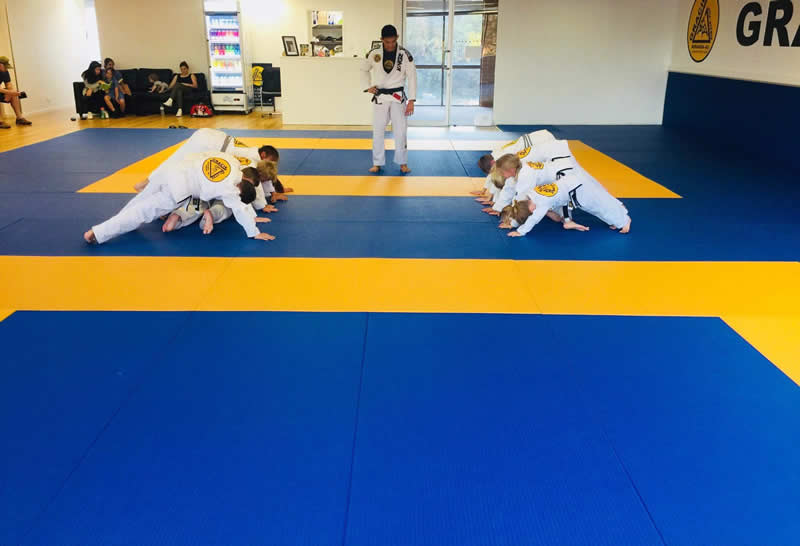