Why is Gracie Jiu Jitsu such an effective women’s self defence system?

At Gracie Miranda we’re lucky enough to get students from all over Sutherland, from Caringbah to Oatley to Tarren’s Point. Some train for competition, but not everyone in The Shire is interested in gold medals. Instead, many students train Brazilian Jiu Jitsu simply because they want to feel safer.

This is especially true for women, who often don’t have the option of relying on size or strength to protect themselves. All popular martial arts provide a degree of safety to practitioners (if they didn’t, they would have died out decades ago!), but few offer women the self defence skills of Brazilian Jiu Jitsu, aka Gracie Jiu Jitsu.

To make a complicated history of martial arts short and sweet, here are three reasons why Gracie Jiu Jitsu. 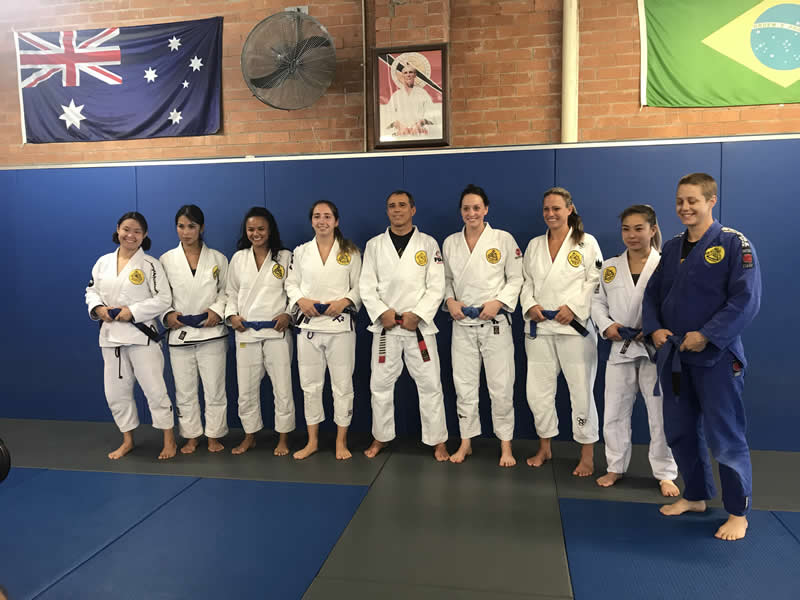 Women’s Self Defence; Grappling, not striking

Think “martial art” and imagery of Bruce Lee or Jackie Chan probably comes to mind. Brazilian Jiu Jitsu won’t teach you how to punch, kick or strike, and sadly there’s no real martial art that lets you take out hundreds of bad guys in minutes like they do in the movies. Instead, it’s a grappling art. Think wrestling or judo.

Gracie Jiu Jitsu is mostly about fighting on the ground, and will show you how to gain a dominant position and submit your opponent with chokes, armlocks, leglocks and more.

This relates directly to women’s self defence. If you’re a woman, it’s unlikely than an unscrupulous character is going to try and strike you down on the street. More often, bad guys will try to manhandle you via grabbing an arm or the torso. Gracie Jiu Jitsu is literally tailor made to defend against this.

It’s the hips, not the grips!

There’s another major benefit to grappling over striking. Striking arts, like Muay Thai or boxing, rely more on athleticism, on being stronger or more explosive than your opponent. Size and strength are certainly still factors in Brazilian Jiu Jitsu, but they’re factors that can be neutralised by technique.

Your power in Brazilian Jiu Jitsu comes from your hips, as hip movement is the basis for most techniques. Control your opponent’s hips and you control them. If someone has grabbed you and is holding you down, knowing how to use your hips properly – which sounds simple but takes years to learn – can overcome vast strength and power differentials. Thus the saying: Use your hips, not your grips!

Gracie Jiu Jitsu was developed under the premise that you are smaller and weaker than your opponent. As such, leverage and timing are more important than strength or speed. Don’t get us wrong: If two people have equal technical ability, the stronger or more athletic person wins. But proper technique can easily overcome the strength of an untrained foe.

A technique for every occasion

Different situations demand different responses. When it comes to the actual practise of self defence, Gracie Jiu Jitsu’s strong point is the flexibility of response it affords.

Again, striking martial arts can be effective, but they escalate rapidly. Your self defence options, like a flying elbow or the good ol’ fashion groin kick, often cause grievous harm to the attacker. Sometimes this is justified, but sometimes it’s not.

Consider two situations. In one a man is a little too close for comfort, you’re in a public place like the Caringbah Hotel and while he’s giving off bad vibes, he’s not actually touching you. In the other you’re on a quiet street and someone is actively attacking you, trying to subdue you to mug you or worse. Both scenarios are bad, but require different responses.

You’ll spend a lot of time learning how to put someone to sleep with a choke, but not every scenario will demand that. Similarly, a roundhouse kick can stop an aggressor, but many situations don’t justify knocking someone out. An overreaction is certainly better than no reaction, but sometimes a simple escape will do!

Gracie Jiu Jitsu gives you tools to deal with a spectrum of physical problems, from situations that make you feel uncomfortable to ones that threaten your life. The confidence this gives you is perhaps the martial art’s greatest gift.